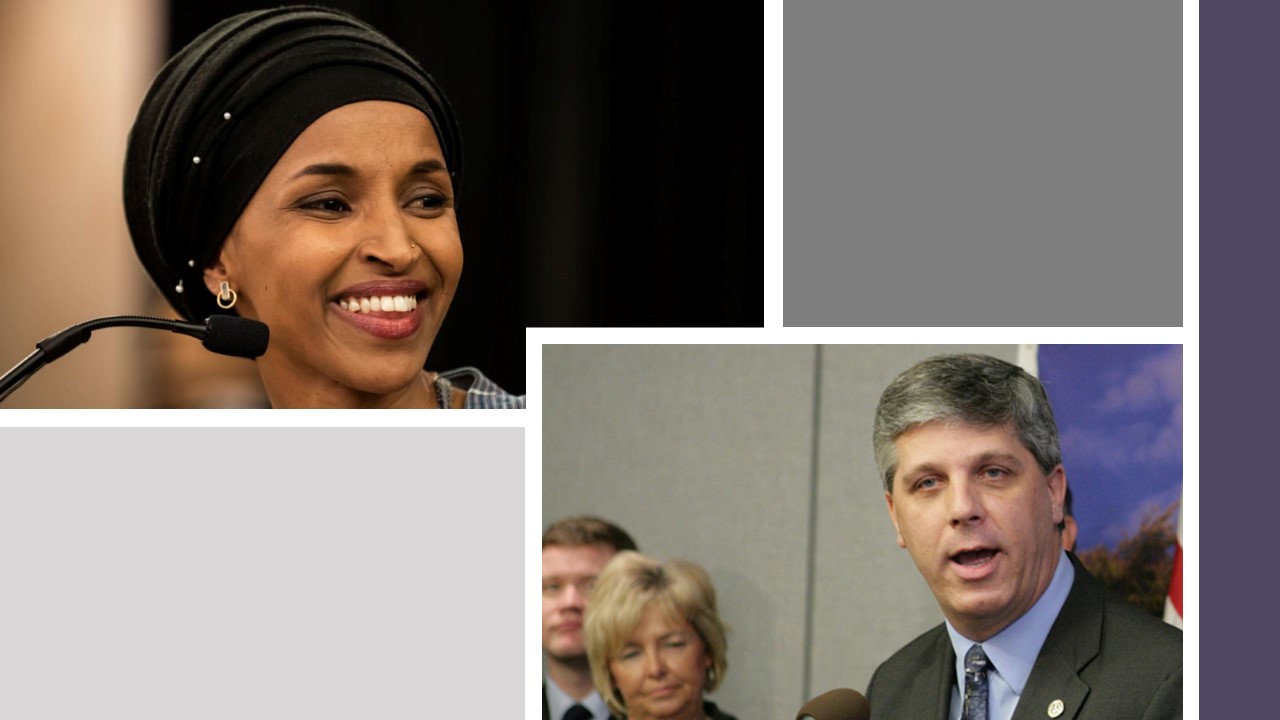 Minnesota State Representative Steve Drazkowski (R-Mazeppa) seems to be the only member of the Minnesota House who is paying attention and the only elected official brave enough to call out Minnesota Congresswoman Ilhan Omar (MN DFL-CD5). In a press conference earlier today, Drazkowski called on U.S. Rep. Angie Craig (MN DFL-CD2) to open an ethics investigation into the activities of Omar, called for the revocation of her security clearance and called for her to be removed from the House Committee on Foreign Affairs.

“Rep. Omar is a serial criminal, and our national security is at stake,” Rep. Drazkowski said. “If a Republican Congresswoman had been accused of all these crimes, reporters would be in an uproar.”

During Drazkowski’s press conference, members of the Minnesota “media” were accusatory towards Drazkowski and making it seem that he was the bad person for blaming Rep. Omar for a series of campaign finance violations, possible marriage fraud, possible immigration fraud, possible student loan fraud, bigamy, kick-backs, diversion of campaign finance funds, personal profiteering, tax fraud and perjury – most all which have been proven in a series of investigative reports by Preya Samsundar, formerly of Alpha News, Scott Johnson of Powerline, David Steinberg, The Washington Examiner and campaign finance investigations.

The most recent bombshell regarding Rep. Omar came a few weeks ago during a Campaign Finance Board investigation where it was discovered that Rep. Omar filed joint income tax returns in 2014 and 2015 with Ahmed Hirsi, who she was not legally married to at the time. During those years, Omar was still legally married to Ahmed Nur Said Elmi, who is allegedly her biological brother.

In a weird version of “Three’s Company” it appears that Omar, Hirsi and Elmi lived together in both Minneapolis and South Dakota during Omar’s “legal” marriage to Elmi. 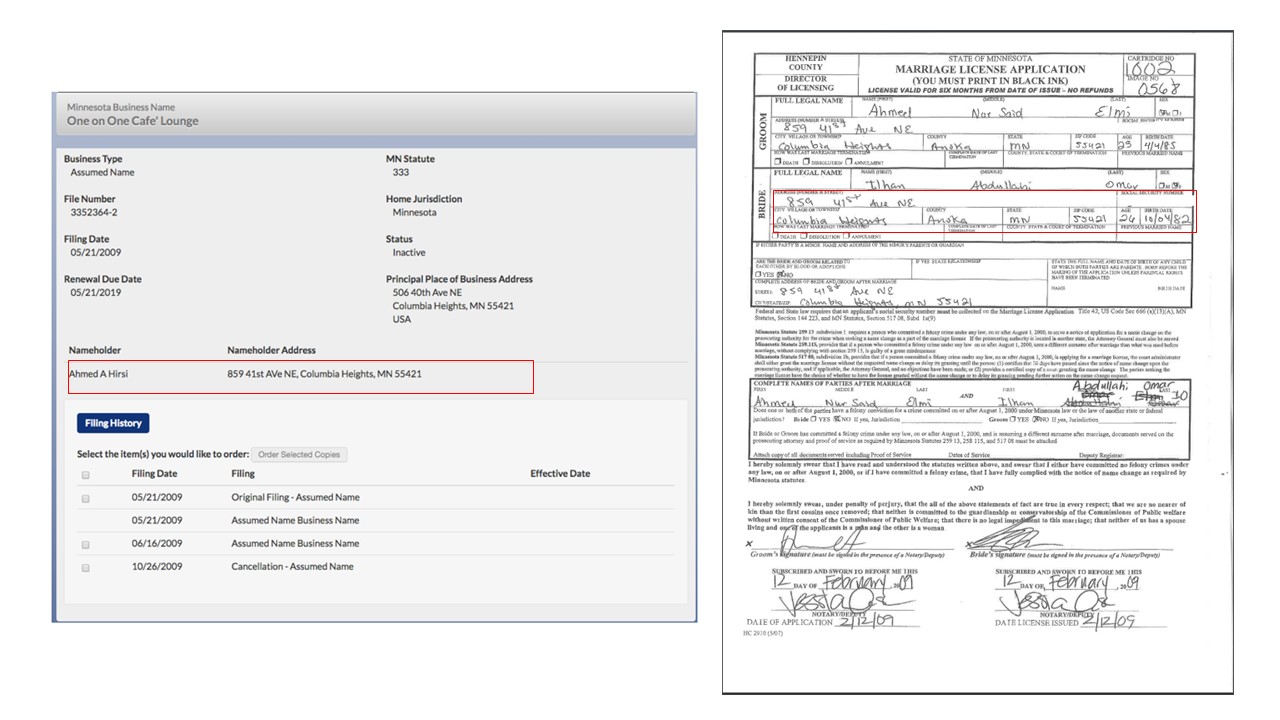 Omar even admitted that she and Hirsi moved to North Dakota together so “she could finish her bachelor’s degree in political science” in a 2013 TCDailyPlanet article on the couple. She graduated from NDSU in Spring 2011.

The Washington Examiner reported last week public legal documents placed Hirsi and Omar living together in the Cedar-Riverside neighborhood of Minneapolis in 2009, the year she “legally” married Elmi and two years prior to her self-claimed reconciliation with Hirsi. The documents included 24 traffic violations and misdemeanor charges against Hirsi, which were obtained by the Washington Examiner, where Hirsi listed his address consistently in 2006, 2008, 2009, 2010 and 2011 at a single Cedar-Riverside address. Ilhan Omar, in four minor cases against her in 2007, 2009, and 2012 listed her address as the same address as Hirsi. The Washington Examiner emphatically pointed out that courts listed the same address for both Omar and Hirsi in separate traffic violations in mid-2009, which is the same year that Omar and Elmi were married. The Washington Examiner did not post the address in question.

The history of the three all living together is not a mistake or an accident. This is deliberate. And if Elmi is indeed her biological brother, she very well possibly first committed perjury on the application of her 2009 marriage to Elmi. On the document she signed, it clearly states at the bottom, “I hearby swear, under penalty of perjury that the all of the above statements of fact are true in every respect; that we are no nearer of kin than the first cousins once removed; that neither is committed to the guardianship or conservatorship of the Commission of Public without written consent of the Commissioner of Public Welfare; that there is no legal impediment to this marriage; that neither of us has a spouse living and one of the applicants is a man and the other is a woman.” [Emphasis added]

Drazkowski said during his press conference that he has bipartisan support from Democrats in the Minnesota House who supported the congressional investigation into Omar. He said there were at least three Democrats in the Minnesota House who are “interested in this and believe there is credibility and a need for this discussion to happen.” Drazkowski went on to say that one Democrat in particular is “glad this is happening because they saw some severe problems.” Drazkowski declined to reveal the identities of the  Democrats who also expressed concern over Rep. Omar’s behavior, questionable ethics and inability to follow the law.

There is also one other Democrat who confirmed in an August 2018 article in The Intercept that the “story about the two husbands is completely true.” Phyllis Kahn, a democrat, was the 44-year incumbent who was defeated by Ilhan Omar in 2016 during the Minnesota House primary in District 60B. None of the Minnesota media followed up on Kahn’s comments regarding Omar committing marriage fraud. And for good measure, Kahn also called Omar, “anti-Semitic” in the same article:

“If we are going to respect our national security and the rule of law, we need the truth and justice to prevail,” Rep. Drazkowski said.

Now, let’s see if anyone in the United States Congress is as brave as Rep. Steve Drazkowski.