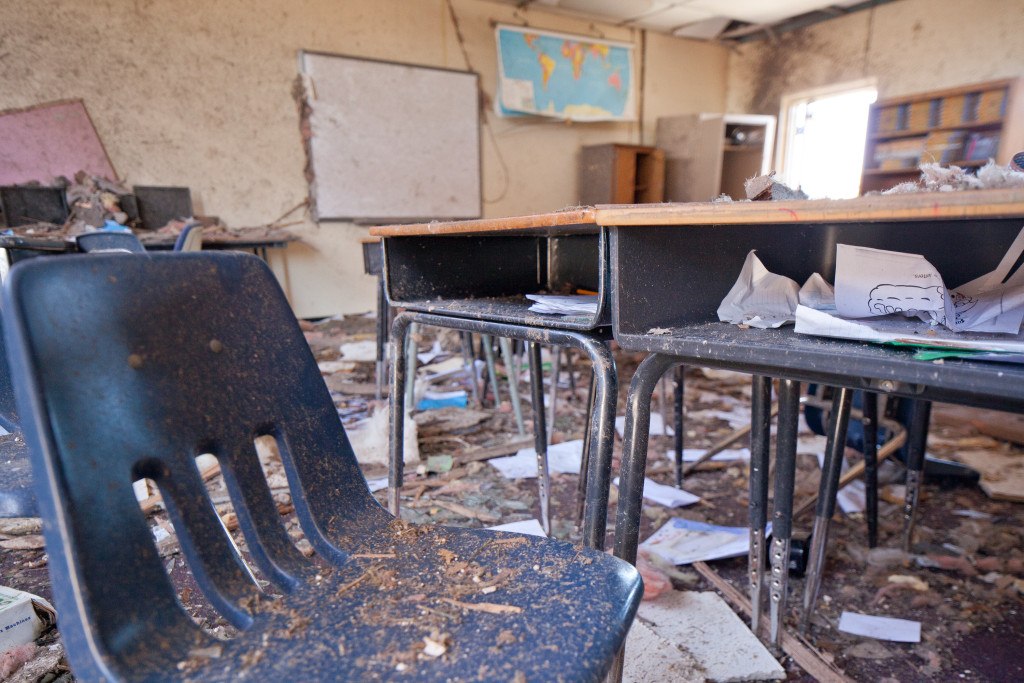 In May 2019, Eastern Carver County Schools in Minnesota made headlines when they hired an equity survey company that employed anti-Semitic and anti-Trump staffers to conduct a survey for the district at the end of the last school year in an attempt to heal racial tensions in the district. The Deplorable Housewives of the Midwest broke this story and it immediately made parents question why the Eastern Carver County school board did not properly vet the company hired to perform the equity survey and why the equity agenda was being forced upon district families in the first place.

Almost overnight, the word “equity” became ubiquitous in the school district, along with numerous other school districts throughout America. Equity is the latest agenda being pushed into local governments and school boards throughout the country.

Who is funding the Equity Agenda

According to the Daily Caller, a number of the left wing, progressive networks pushing these policies in cities and school districts across America are being funded by that crap-stain of a human being, George Soros.

As most of us with a brain and a modicum of common sense know, Soros has been trying to dismantle America and tear it apart by pitting people against people by race, religion, income, and professions. He has been financially linked to the Ferguson, Missouri/Michael Brown violence against law enforcement. He has also been tied to the aggressive Black Lives Matter movement which counters blacks against whites in cities across America. Remember the Philando Castile incident in Minnesota in July 2016, where throngs of organized protesters poured across I-94 in Minneapolis, blocking traffic, creating chaos and injuring law enforcement? Soros’ organizations have been affiliated with Antifa and its lesser violent progressive/left activist cousin, Indivisible.

We are now living in an America we no longer recognize and we are seeing toxic agendas being implemented at what seems to be lightning speed in local governments and school boards.

In 2017, Eastern Carver County Schools joined “Reimagine Minnesota,” an organization that was formed by school superintendents to ensure the equity agenda is implemented in schools. Reimagine Minnesota used data from the George Soros-funded “Center for American Progress” to help determine the needs and goals of the organization. Just to give you some perspective on who Center for American Progress is, it’s first president and CEO was Hillary Clinton’s presidential campaign manager John Podesta.

Other racial equity organizations that have been working with Reimagine Minnesota include Government Alliance on Race and Equity (GARE) and Race Forward.  At a recent GARE workshop in Minnesota this summer, one of the attendees said the issues discussed were anti-American and racist. Among the topics discussed were: 1) All Men are Created Equal, which is enshrined in the Declaration of Independence is a racist statement because it was intended to mean white men only 2) the Pledge of Allegiance is racist and offensive to people of color and 3) The Gettysburg Address was meant for white property owners only.

Race Forward is waging a campaign against the word illegal called “Drop the I-Word“.  This campaign defines the word illegal as “racially derogatory language”.  Changing the vernacular and deeming words as racist is what these equity organizations specialize in. 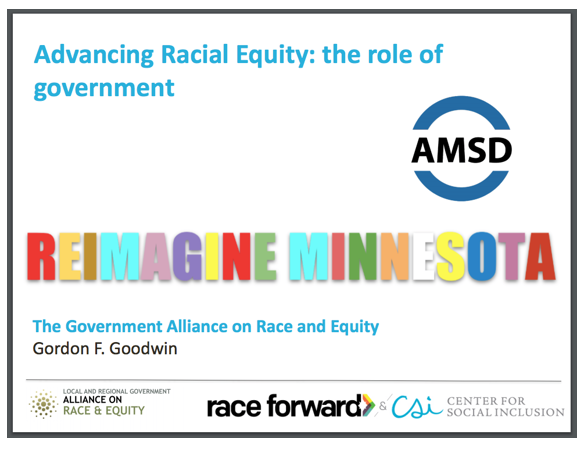 In addition to conducting an equity survey and joining Reimagine Minnesota, The Eastern Carver County School Board put together an Equity Advisory Council. Of the 120 people who applied to be on the council, only 19 were selected. Researching the backgrounds of several members, we discovered through social media that some of them are associated with the Soros-linked progressive activist group, Indivisible. Proponents of the equity agenda don’t even hide their affiliation with this leftist-activist group and have come to school board meetings wearing “Indivisible” T-shirts. (Editor’s note: the Eastern Carver County School Board’s recording of the September 23, 2019 school board meeting does not have video as the school board claims the video recording failed during taping. This photo was taken during this school board meeting by The Deplorable Housewives of the Midwest.) 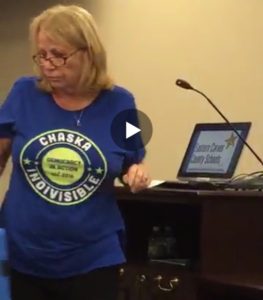 The Daily Caller News Foundation, using information from IRS 990 forms, put together a flow chart of the money behind national equity movement. GARE along with Race Forward are connected to George Soros through Center for Social Inclusion (CSI). CSI merged with Race Forward in 2017. GARE is a joint project of Race Forward and University of California at Berkeley’s Haas Institute for a Fair and Inclusive Society. 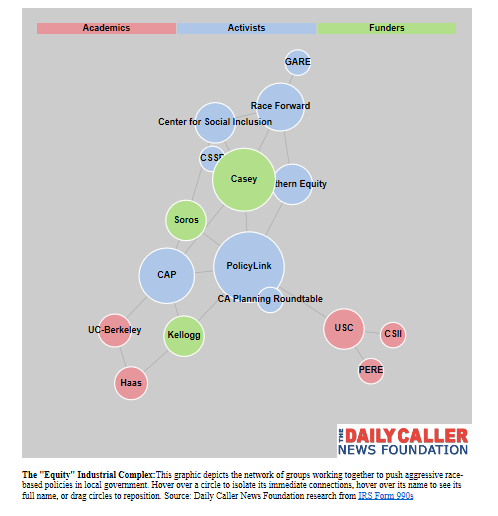 Taking the chart created by the Daily Caller Foundation to a local level, here are Eastern Carver County’s ties to the intricate labyrinth of equity groups and how they are tied to Soros: 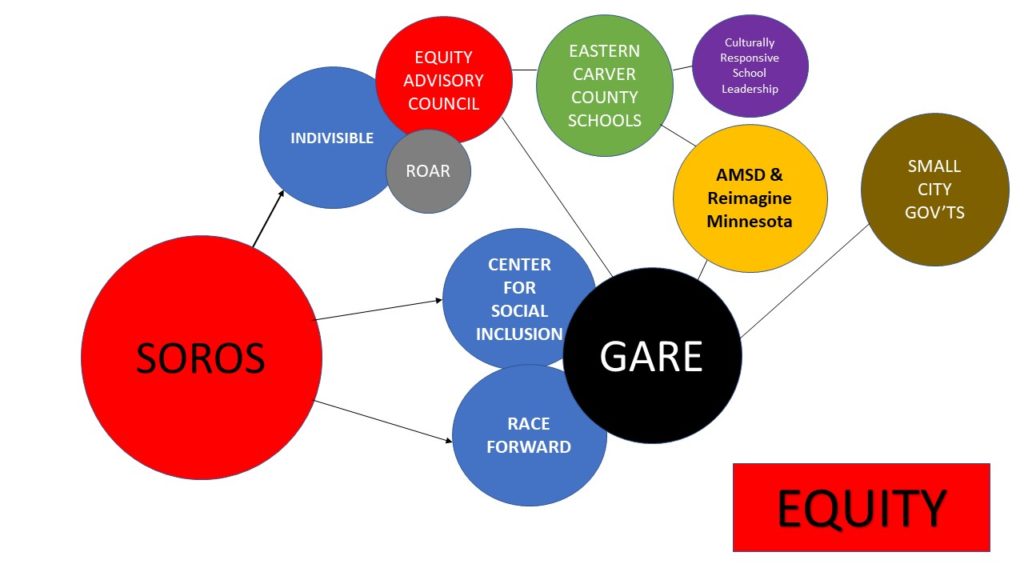 GARE racial equity workshops have been implemented in 85+ cities across America including Albuquerque, Austin, Grand Rapids, Louisville and Philadelphia.  In November 2018, GARE’s “Facing Race” Conference was held in Detroit, Michigan. Among the featured speakers at the conference was far-left, anti-Semitic, anti-Trump Congresswoman Rashida Tlaib:

To give you an idea of what Race Forward stands for, they proudly featured a podcast with anti-American, anti-Israel, pro-Sharia, pro-BDS agitator Linda Sarsour on their website. They introduce Sarsour as a “racial justice and civil rights activist”  and the podcast “tells how her activism is informed by her family and Palestinian roots.”  This is what Race Forward supports.

Teachers’ jobs may be in jeopardy

Teachers will be forced to adhere to the equity agenda. If not, they could possibly risk losing their jobs. In a paper entitled, “Culturally Responsive School Leadership: A Synthesis of the Literature,  Dr. Muhammad Khalifa of Culturally Responsive School Learning Institute (CRSLI) — and the man behind the Eastern Carver County equity survey — wrote, “…culturally responsive school leaders must also be willing to make the hard decision to counsel out those teachers who recognize this work (equity) is not for them.” (Emphasis added).

There are some teachers who are brave enough to fight back against the equity agenda. St. Paul teacher Aaron Benner, who is African-American, spoke out against his school’s equity policy at a school board meeting in 2014. He said he believed the policy did a disservice to students of color by not holding them accountable for their unruly behavior. During that school year, Benner had to endure a series of attacks by the St. Paul school district, including four district-led investigations. Benner resigned from his position as the investigations created a hostile work environment. He filed a federal lawsuit against the St. Paul school district and eventually reached a settlement with Benner receiving $525,000. What is most disturbing about this particular case is Benner said the teacher’s union did not advocate for him while he was under investigation.

“My union rep tried to have me plea to one of the investigations which made it clear to me that my union was complicit with the district,” Benner told the publication, For Kids And Country. “My problem with my union is that they sat back and allowed the St. Paul School District to harass me and did nothing. They took my union dues and did nothing to represent me.”

How many other teachers like Aaron Benner will be brave enough to stand up against the equity agenda? Will they just go along with it to save their jobs and their benefits?

As for Eastern Carver County Schools, they are moving forward with their equity plan, despite the fact that only 14% of parents filled out the equity survey. With 86% of the school district not participating in the survey, how accurate do you think the results of this survey are? Will the correct choices be made by the school district with such a low participation rate in the parent survey?

At least we now know where this equity agenda is coming from. We now know where the big bucks to fund this agenda are coming from. It is being brought to you by the very people who want to tear America down. Equity will fundamentally transform public schools and unless parents speak out against it now, it will be in school districts everywhere very quickly.