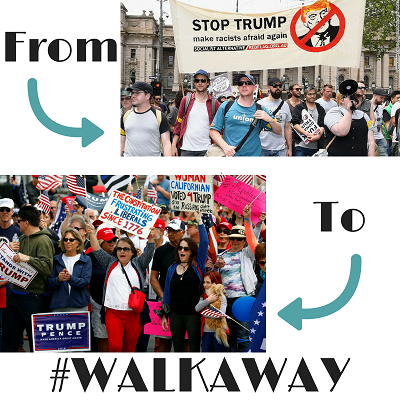 The #WalkAway Campaign gains ground as liberals realize the Democrat Party has chosen identity politics, divisive rhetoric and violence over unity and Freedom.

The USA is 18 months into the Trump presidency. The liberal hysteria that began on November 8, 2016 has not abated. In fact, as recent events have shown, it has gotten worse.  With Democrat leaders like Maxine Waters and media like the New York Times calling for outright harassment and violence against Trump administration officials, America is witnessing a time of division not seen since the pre-Civil War era.

The backlash to the divisive rhetoric and threats to Trump’s family members and administration by those on the left is not exactly what those so-called “leaders” were counting on.  Rather a new movement has taken shape: The #WalkAway Campaign.

Brandon Straka, founder of the #Walkaway campaign, told Populist Wire in an exclusive interview why he started the movement:

“My mission for the #WalkAway Campaign is to expose the truth about liberal ideology, to reveal to those on the left what is really happening behind the curtain, and to encourage all people- particularly minorities in America, to walk away from liberalism and the Democratic Party.

Liberalism has encouraged American minorities to no longer see themselves as an individual with unique potential or personal power. It insists instead on encouraging collectivism and tribal mentally by organizing these individuals into groups based off of race, gender, sexuality, religious affiliation, and national origin- then subdividing these groups into camps of “victims” and “oppressors”.

The distorted framework of this credo is sold to us under the banner of that slick advertisement which promises us that “diversity is our strength”. And yet, here we are- more divided than ever. Incapable of civil disagreement in matters of politics and culture. Nuanced opinion has been replaced with irate and mindless groupthink. The left has abandoned common sense and critical thinking while embracing its campaign of rage.

And sadly, the Democratic Party and liberal media have not only adopted but fed and nurtured this climate of extremism.

The #Walkaway Campaign is a grassroots movement dedicated to sharing the stories of people who can no longer accept modern “progressive” liberalism, and have chosen to walk away. It is a Facebook campaign set up to allow people to share their stories by video or text- about why they walked away, are going to walk away, or why they are encouraging others to walk away.

Straka details his own journey from Liberal to Conservative in his powerful viral video (above).  Between Facebook and YouTube, the video has had over one million views and the #WalkAway movement has gained steam on both Twitter and Facebook, with people sharing their #WalkAway moment with the world.

I was a registered Democrat for the greater portion of my voting life. The #Clintons cinched it for me. I was an #Independent through the Bush years. Obama was an eight year blank. The hatred and violence the @Democrats now promote convince me I was right to #WalkAway…

I was a registered democrat until the flood of 2016. Hillary nor Obama came to LA and gave us any kind of hope or encouragement. Trump Did, regardless of what the news said about him. Hd stepped up when it counted. That’s when I knew it was time to #WalkAway

#WalkAwayCampaign – Since I have joined the last week or so, I have never felt so liberated and loved enough to be able to tell a story and share the same feelings on the lies and manipulations of the left. Thank you Brandon, you are awesome. #WalkAway

I just seen your video! That is exactly how I feel! That is why I left the dems. This modern day “Progressive Liberalism” is TOXIC! It goes against everything that I am. They are no longer the party of JFK! I will join your March! #WalkAwayCampaign pic.twitter.com/nT5RphsEJY

#WalkAway #walkawaycampaign 1) how Bernie was treated. 2) as a Bernie supporter engaging w #maga peeps I was shocked 2C how kind & thoughtful they all were. Nothing at ALLLL like HRC fans. Trump supporters are not what we’re being told. I’m with them. Thank you to all of you!

This is not just a movement for former liberals, however.  Straka also is encouraging conservatives to share their stories on Facebook and Twitter in order to “to take back the narrative of who they truly are, which has been misrepresented for far too long by those on the left. This campaign is a platform for those on the right to use their voices and tell the world what it means to be a conservative in America today, and to erase the oft-repeated sentiment from the left that conservatives do not welcome minorities on the right.” (Populist Wire)

3 thoughts on “The #WalkAway Campaign”