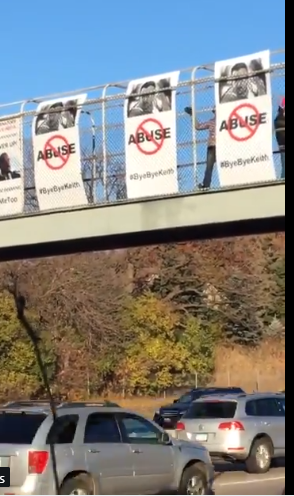 State Patrol Harass Anti-Ellison Rally on Bridge at Nicollet and I-494.

Remember the violent protests on I-94 that injured police officers, shut down the interstate and damaged property in the Summer of 2016? In Minnesota, that type of violent protest is condoned and embraced as long as you’re on the Left side of the political aisle. On November 1, a group of conservatives were threatened with arrest for protesting against Minnesota Attorney General candidate Keith Ellison. The group was not blocking traffic, throwing rocks, urine bombs or pipe bombs. No one was injured or inconvenienced by the nine conservatives on the walking bridge. Their crime – placing signs against Keith Ellison on a bridge.

On November 1, a peaceful group of enthusiastic conservatives carried several large signs bearing the image of Keith Ellison onto the walking bridge overlooking I-494 in Bloomington. The signs were placed between the chain-link fence and the bridge structure to ensure they wouldn’t blow over while the group waved at traffic below. Their message regarding Ellison was clear – he abuses women and should not be entrusted with the job of leading the highest law enforcement office in the state of Minnesota. The words, “#ByeByeKeith,” clearly visible to those inching by during rush-hour traffic must have been too harsh of a message for the thin-skinned Democrats who alerted the state patrol to their presence.

“You aren’t allowed to be up here,” said the officer. “We don’t want any accidents.” Michele Even, leader and spokeswoman for the group of conservatives, politely informed the officer that the signs were not affixed to the bridge and the group has been protesting on various bridges throughout the Twin Cities for a number of weeks without incident. “I’ll be back with the statute,” said the officer as he left.

“Take the signs down and hold them or we are going to arrest you and take you to jail.” Under the threat of arrest, this law abiding group of citizens exercising their First Amendment rights were forced to remove the signs and hold them.

From candidates to firefighters, bridge rallies have always been accepted and embraced in Minnesota. Just this morning, a group supporting Dean Phillips was holding signs and blocking traffic on the overpass between Highway 100 and Valley View. Police and the state patrol ignored the group of Democrats. 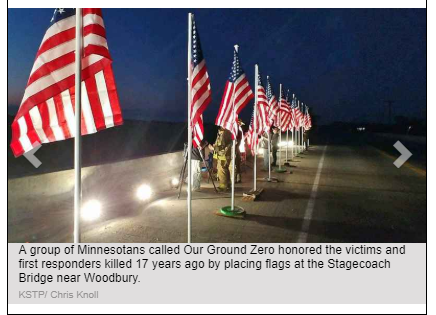 Something seems different in Minnesota this election season. Hatred for Trump and conservatives is beginning to eclipse the freedoms we once took for granted. Wake up Minnesota!  If Keith Ellison becomes your Attorney General, Sharia compliant speech and policing policies will become the law of the land. We will be the new London.

The Deplorable Housewives were on the bridge and got the entire exchange on video. Take a look!